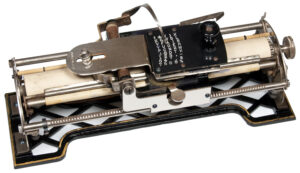 ‘Charles Spiro: Reaching Back in Time’ – An illustrated article

The Morris typewriter was invented by Robert Morris of Kansas City. His first version, with a wooden base,  appeared in 1885 and had some success in selling a few hundred.  In 1886 Mr. Morris sold the manufacturing rights to Hoggson & Pettis Manufacturing Company of New Haven, Conn., upon which improvements were made to its design, including a wonderful metal trellised base, which can be seen on this Morris.

Hoggson & Pettis were well-stablished machinists of the day, making among other things, lathe chucks, cutting dies, leather tools and a check protector. Who better to make the Morris Typewriter. Hoggson started the business in 1849 and it became a company in 1878 when Pettis became a partner. At its height the company hired one hundred skilled workmen in a ‘modern’ factory of sixteen thousand square feet, “splendidly equipped with the latest improved machinery and every facility”. They exported to “every civilized country”.

The Morris is about as strange as typewriters got, with a white rubber platen and a carriage that traverses across the top of the typewriter on two metal rods. Within the carriage is a rubber index plate of characters that is moved into position with the black knob. Then the typist depresses the knob to bring the rubber characters onto the paper.

The advertisement states that the Morris writes 70 words a minute. However, after typing on this Morris, I would be surprised if 15 words could be achieved. One of the main problems is that the leaf spring that holds up the index assembly is very strong and requires a very hard push down to print. Also one would be slowed down with the metal index pointer being positioned so close to the index plate, as the pointer would scratch and rub against its surface with any attempt at speed.

The last five images seen below are from the rare Morris manual and include a wonderful illustration of the Hoggson & Pettis factory.

“The low price of “The Morris”, places it within reach of Postmasters, Physicians, Druggists, Lawyers, Teachers and Merchants, who have any amount of correspondence, or pen work of any kind.” 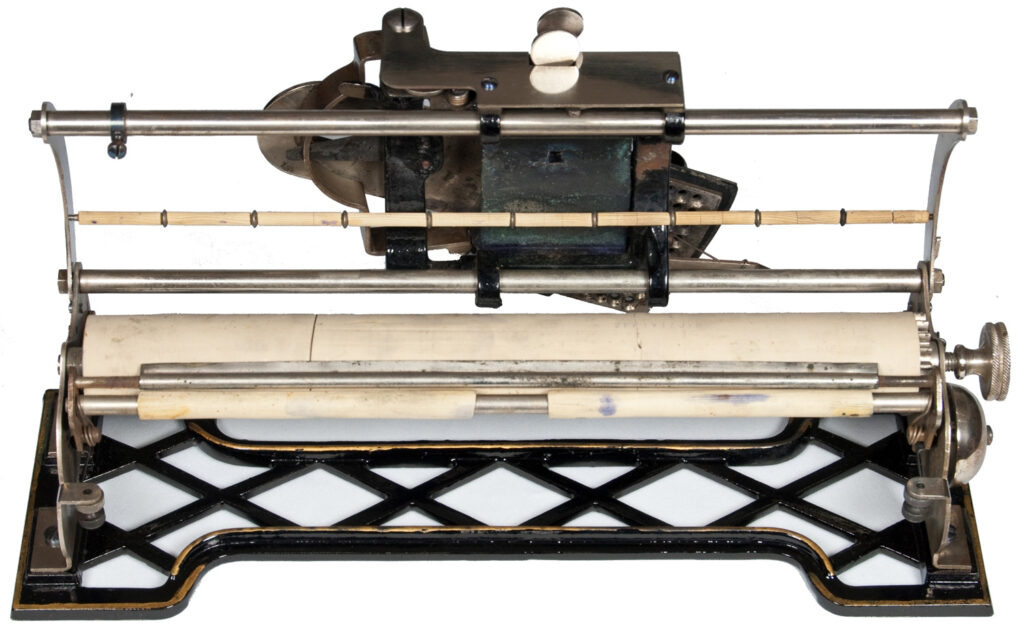 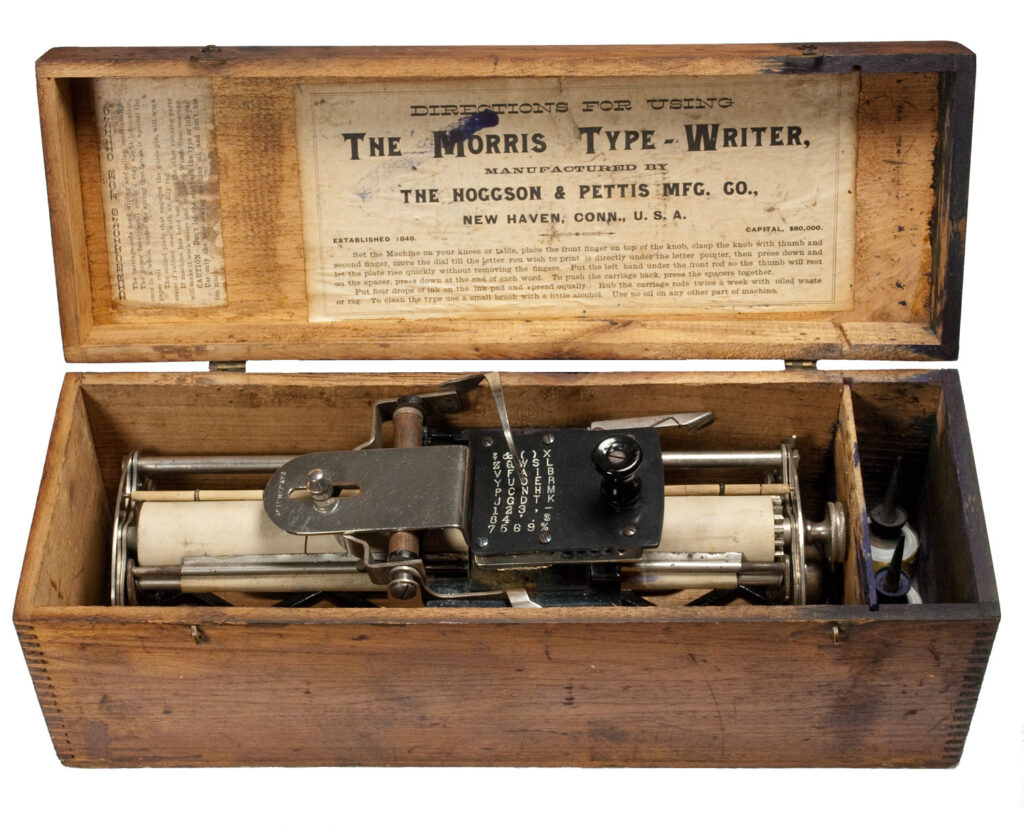 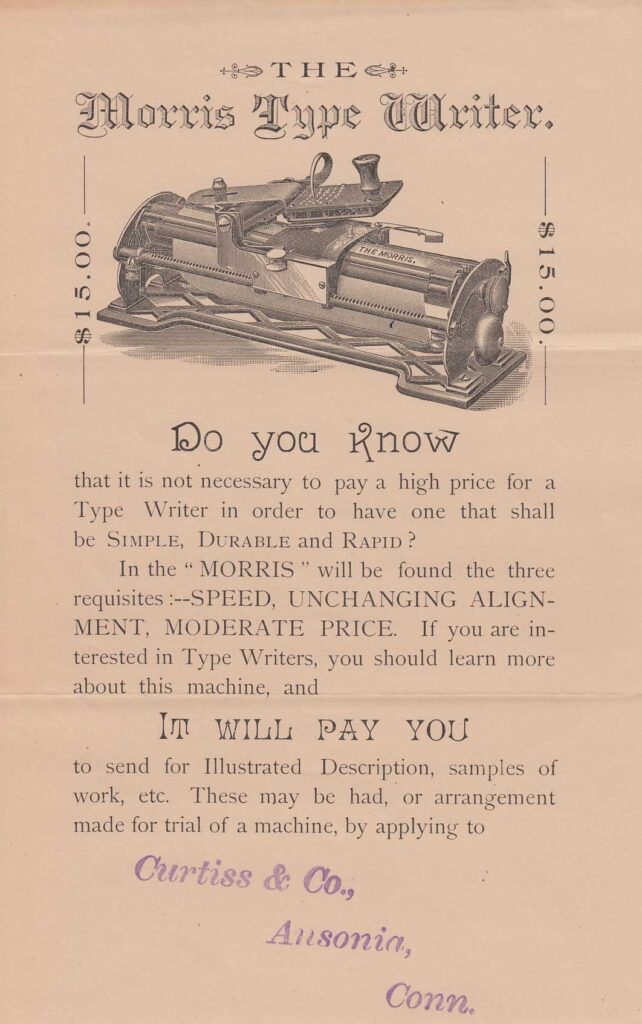 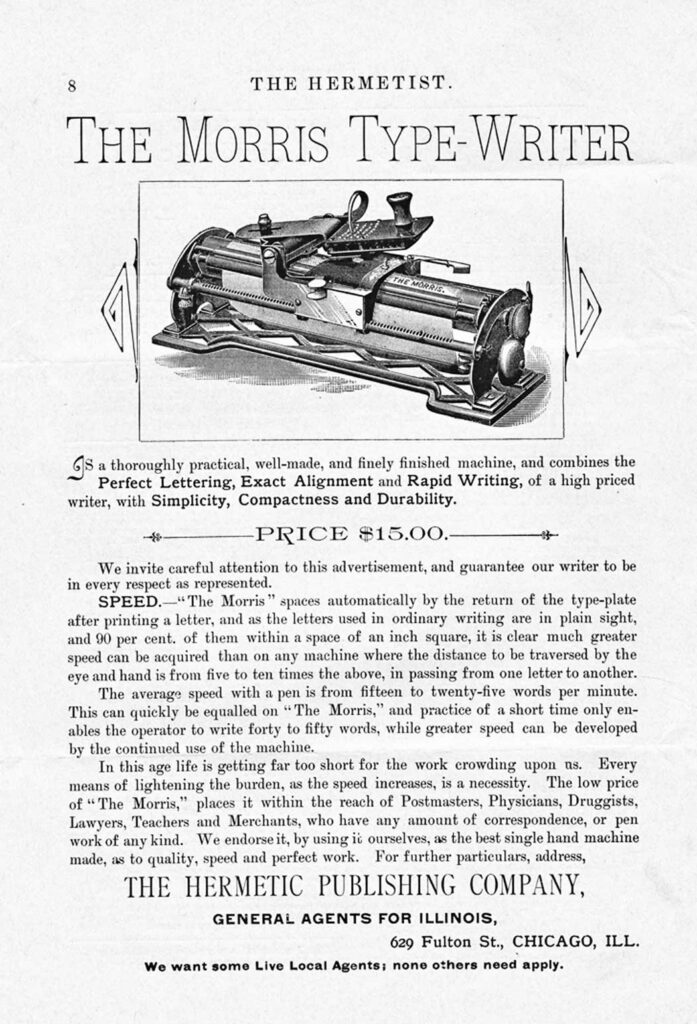 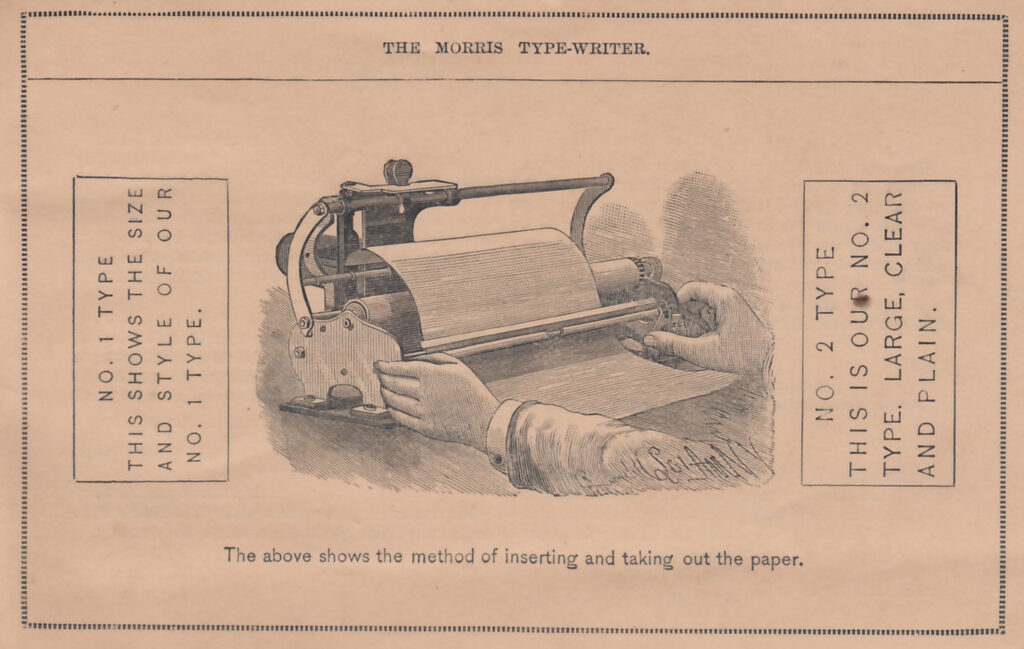 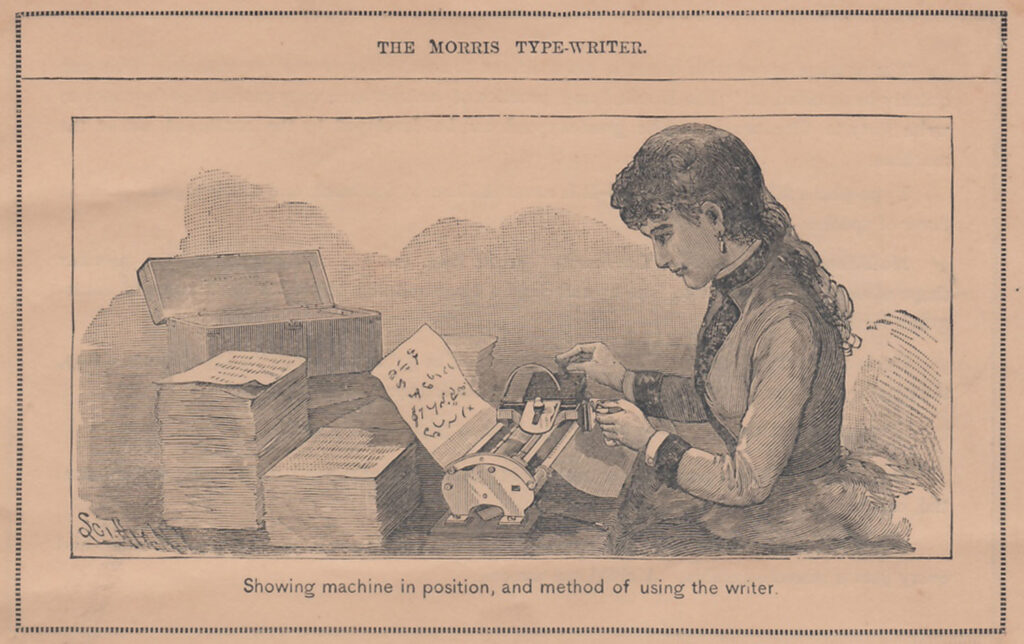 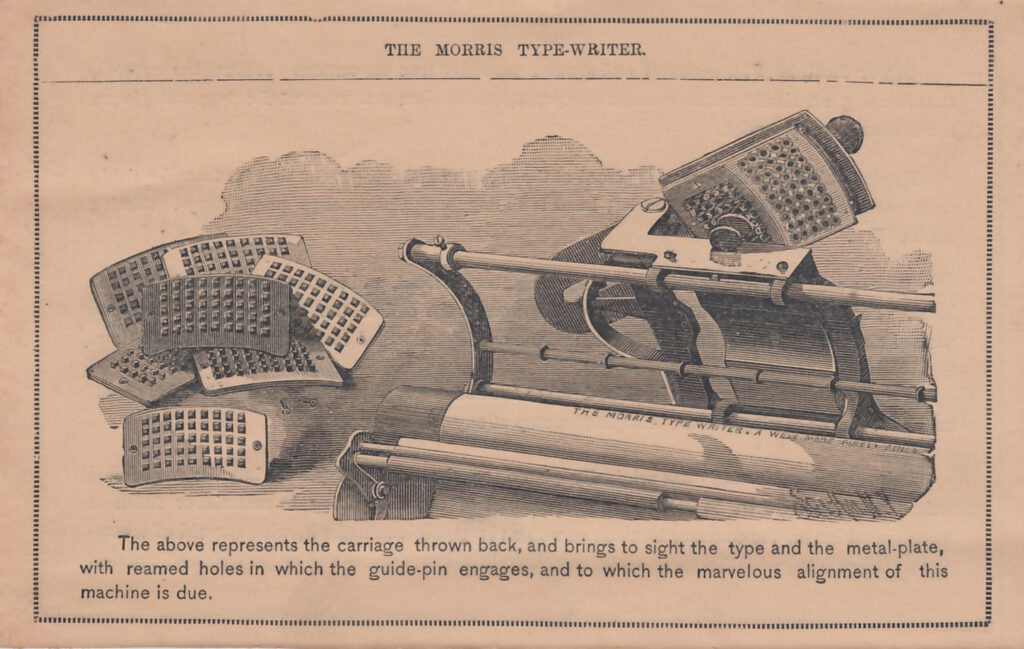 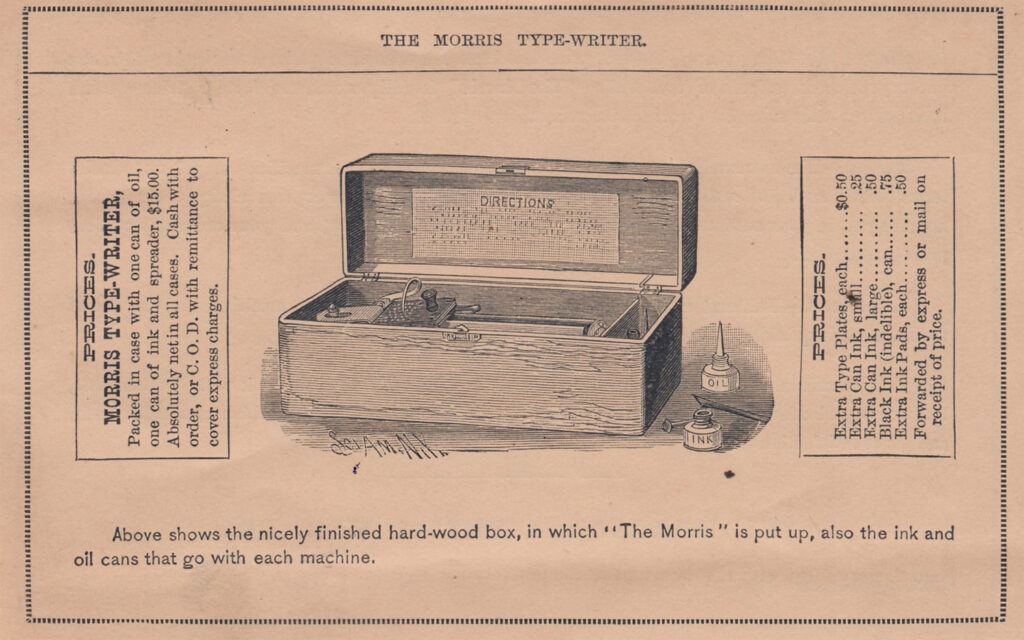 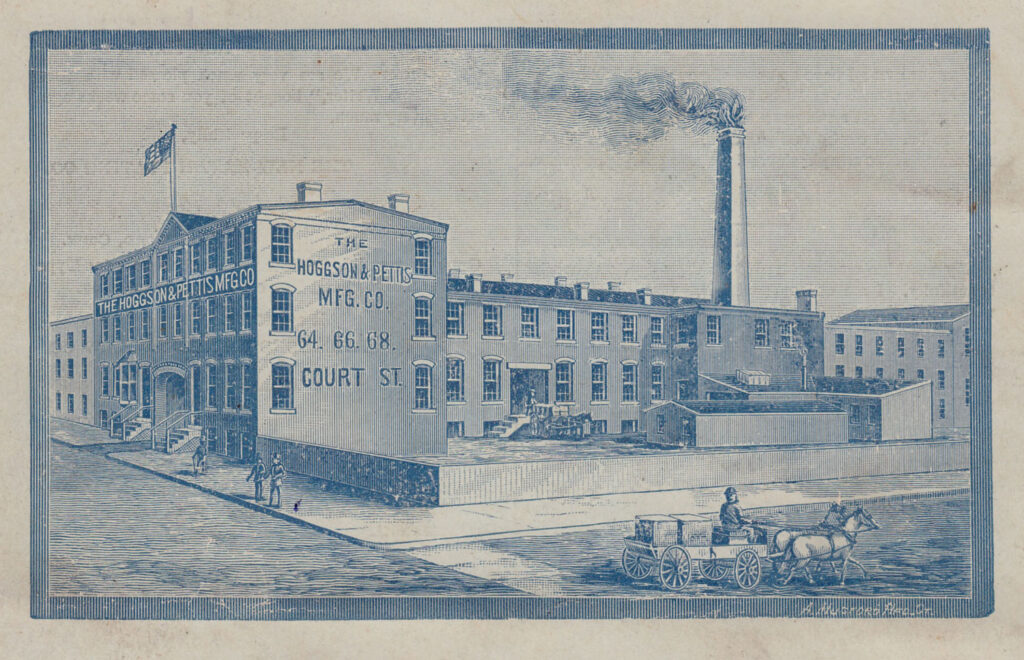